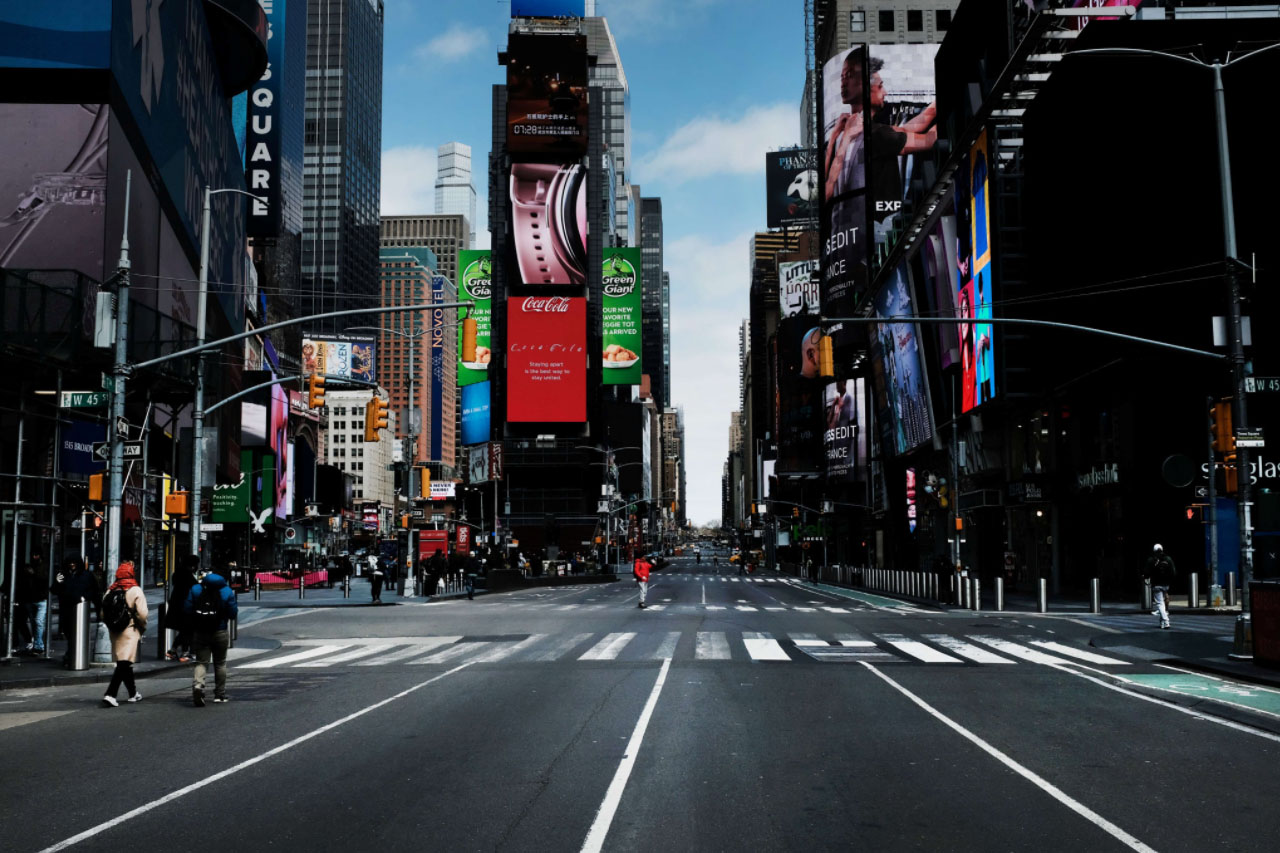 A woman wearing a protective face mask walks by a giant banner in Geneva during the coronavirus pandemic.AFP On Monday I emerged from two weeks in home quarantine after having returned from a brief seminar I gave at the Psychoanalytic Institute in Berlin. As the child of second generation Holocaust survivors, associations tinged with black humor come to mind – it figures that my journey to Germany would lead to me being stuck in a “ghetto.” But it’s no joke. Rather, it’s a persecution fantasy surfacing from the depths of the unconscious and sparking a stream of thoughts about what becomes the fate of the human mind when it is under mortal threat.

The coronavirus crisis is experienced as a radical state of danger, not just because it poses a mortal threat, but to a large extent also because the threat is undefined in terms of its scope, duration, methods of attack and means of defense against it. This is the most menacing combination for us –an external danger whose shape is not clearly deliniated, which gives way to internal scenarios. Our inner demons will always be bigger and scarier than the external reality. Within us, they have no solid boundaries, and no meaningful logic or language that we can hold on to.

Two types of reactions are liable to arise in the face of this threat. One rejects the reality and the second accepts it and “works with it.” We all fluctuate between the two throughout our lives. In the more primitive position, which I call “the reality refusal position” (and which the psychoanalyst Melanie Klein referred to as the “paranoid-schizoid position”), the mind reacts with denial and a sense of omnipotence on the one hand and panic, exaggeration and helplessness on the other.

The omnipotent response will seek to avoid pain and anxiety through intensive over-empowerment of our abilities. Often this will be accompanied by contempt, wariness, rage and disdain for the importance of guidelines, denial of the magnitude of the moment and refusal to heed instructions. There will also be figures who are declared to be “ideal” and “saviors,” but they too are colored by the radical splitting that characterizes this emotional defense as a means of making the world orderly and logical. Another type of the “reality-refusal” response activates an infantile terror of panic and helplessness, as if saying to one’s inner mother: “Hear how hard I am crying! It means you have to save me from this distress right this minute!”

The second position (what Klein called the “depressive position”) is that which I name “acceptance of the reality.” From this position one recognizes reality’s dangers and our vulnerability to them, but one is also anchored by the inner agency that can cope with them. This is a more developed position in its readiness to acknowledge the different aspects of reality with openness and modesty, and to take responsibility. This sober view is accompanied by anxiety and pain, but also by the recognition that this is a moment for gathering in the calm eye of the storm and not for losing one’s head in the whirlwind that it creates. This is a position that accepts with surrender that we can only do the best we can, and takes solace in the idea that this best effort will always find avenues of expression.

Joggers run along the Monceau Park in Paris, on the sixth day of a strict lockdown in France aimed at curbing the spread of COVID-19.AFP

The coronavirus crisis is the embodiment of the phenomenon that Freud called Das Unheimliche (The Uncanny). In this state, the person is tossed out of their sense of being at home, of being master of their fate. Freud gives the poignant example of a nighttime moment on a train when he sees an unfamiliar old man mistakenly entering his compartment, only to realize that he is seeing his own reflection in the mirror of the small bathroom whose door has swung open from the jolting movement of the train. He describes the strangeness of the elderly face in the mirror as an “uncanny” moment – in which the wrinkles of old age indicating impending death unraveled the threads of the illusion from which the self’s sense of immortality is woven. The coronavirus is certainly a major jolt to our train carriage. The familiar and safe has become unfamiliar and threatening. Physical stability is violently cast in doubt. Getting together with the people close to us is defined as dangerous. Life as we thought we knew and understood it has turned its back on us, and nothing may be taken for granted anymore.

But “the uncanny” is also an opportunity. Our firm positions, our illusory knowledge, the secret agreements we’ve made with life – are all cracking, and therefore opening up to renewed consideration.

The psychoanalyst Donald Winnicott observed that fear of the future is always sketched in the hues of the past. We fear what has already
happened. No wonder the word “history” is comprised of the words “his- story.” This is upsetting from a gender perspective but still aptly connotes the way we relate to the past. Because history is a collection of stories, our alternating responses are also shaped by these stories. These days, most of us are swinging back and forth between feelings of hope and despair, confidence and fear. We experience these fluctuations because both sides are equally valid and invalid, since we don’t know what tomorrow will bring.

Since this is unbearable, we flip through the possibilities in our inner photo album and stick clear pictures from the past on the wall of the future which is shrouded in haze. In the quest for some estimation by which to gauge the current reality, each one of us is now recalling past world disasters. The traumatic memories are reawakened and flood the mind with powerful anxiety. But positive memories also surface and place themselves at our disposal: figures who taught us what resilience is, difficult periods that culminated in new beginnings. Psychological assets like generosity, moderation, being able to cope with stress, being grateful for what one has and the ability to reach out to help others – all of these now have a special use.

It is helpful to remember that nature (and that includes human nature) always swings between forces of destruction and construction, and that we always feel frightened awe in the face of the destruction (and even at the prospect of death – the sole promise given to us at birth), until blessed routine returns thanks to repression. So has it ever been and so shall it everbe.

MARCH 22: Times Square stands mostly empty as as much of the city is void of cars and pedestrians over fears of spreading the coronavirus.AFP

One thing that can be of great help is being proactive in the face of reality. People who find a role for themselves and any sort of responsibility to assume at this time, or who convert their sorrow and anxiety into the creation of something new, will find that this provides a significant
counterweight to the lack of control we are all feeling right now. Obviously, writing this piece serves the same purpose.

Finally, it’s worth remembering that at any given moment (even the most difficult ones) in a person’s life, much less is happening than what is
happening in the media (the rumor mill, news websites, social media groups) and also much less than what is happening in our internal media
(profound anxieties, traumatic memories, imaginary apocalyptic rumors about the end of the world). At any given moment, a question arises: with which positions and with which spirit do we want to face reality. In this sense, we always have various choices available to us and also a degree of control, even when faced with the most alien and menacing reality.

Dr. Merav Roth is a psychoanalyst, head of the psychotherapy program at Tel Aviv University and author of “A Psychoanalytic Perspective on
Reading Literature: Reading the Reader,” Routledge.