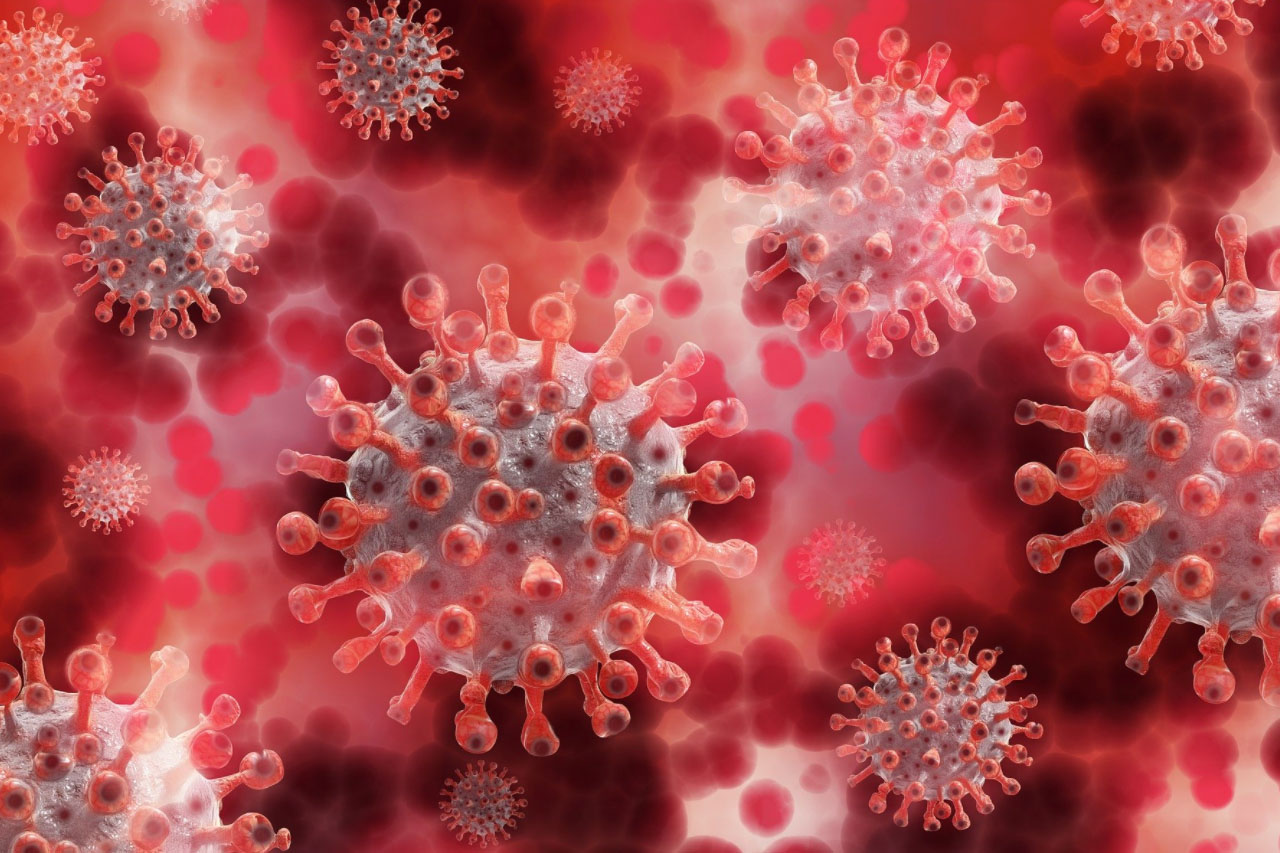 How do we process life under the pandemic and avoid being drawn into the contagion of fear?
by Giovanni del Vecchio, 11 April 2020

A kind of war
We suddenly find ourselves in an unplanned-for dystopia. How are we to find a firm footing in inner and outer worlds so disorienting? After the daily statistics are given, (960 more dead in the UK since yesterday at the time of writing this), politicians and the media rightly turn our focus to the heroes of this battle, the front-line soldiers of the NHS. An old wartime idiom is being revised; a dialectic to galvanise our common purpose and resolve; to bring a manageable structure and a story to the chaos; to stabilise the collective consciousness and reassure us that the
way of deliverance is in our reach: a call to arms …the front line …sacrifice …we must keep going and…stay the course … (Dominic Raab, 9.4.20).

Keep calm but don’t carry on
I’ve heard no one say keep calm and carry on. That most British and nostalgic of aphorisms that first spoke to busy hands on the Homefront. The motto has lost its readership, abandoned on countless walls, desks, shelves, coffee cups, in offices, factories, schools and universities, all of which lie empty and out of reach. In this gridlock, except for those on whom our lives depend, all work outside the home, until further notice, is stopped. At 8pm many of us take our places outside our front doors and on our balconies, clapping and banging kitchenware in salute, in abeyant solidarity with these foot soldiers of Care. As they march bravely on, our clamour holds them in bondage to their work. It’s a racket in more ways than one. They are exhausted, unprotected, dying. They must keep calm and carry on.

We will never forget their sacrifice …their devotion to helping others. …You are the lifeline to so many people…you’ve made us all think long and hard about who the key workers are in our lives (ibid Raab).

We can be heroes
While we are all in this together, some of us are more in it than others. Of course, we need these brave men and women to survive in order that they may look after us and those we love. While our sense of civic duty has been eroded by years of scandal in public life, the propaganda war needs more than ever an identifiably heroic group, of the people, for the people, who will deliver us from this evil. It is the beloved NHS that is our best hope for now, which provides the sentimental focus of our otherwise ambivalent patriotism. The caring professions as a whole
underpin the emotionalism required to compel us to stay at home. From home, we are protecting the NHS and saving lives and thus we too, from the discomfiture of our living rooms, are recruited in this psychodrama of heroes, real and imagined.

Of the rest of us, staying at home is all the duty and fortitude that the state and the times demand. Indeed, because we are all suspects and victims in this contagion, our only hope is to take state-directed flight behind closed doors. The virus makes heroes, worrying sloths, and lepers of us all. But the common imperative is to hold firm in our paralysis. To believe that we will soon reach the promised plateau, that structural element in the narrative, where complications notwithstanding, the story’s plot will stabilise and the road to victory be clear. We trust that we will be able to stem the tide; we will safely return to work.

Alien
We see from the wide-shots  of our empty beaches, urban centres and national parks, that the surplus populous is indeed staying at home. We are as dazed as we are united. United in our uneasy co-operation, in our impotence and fear. If we follow the science and the data, we learn that the contagion, visible only by the havoc that it wreaks, imperceptibly infiltrates our respiratory tracts, settling down to incubate inside our lungs, from where, Alien-like, it launches itself in an explosion of sirens on the body politic. The virus is indiscriminate and it deceives: if
asymptomatic, it turns us into smiling assassins; we may have symptoms that subside before they return with a vengeance. If and when the danger passes, the virus seems to have the potential to reactivate.

Coronavirus / Covid-19 / SARS-Cov-2.
While we are sedated all day long with the narrative tropes of heroes and patriots, the virus offers no scapegoat or knowable enemy, except in the conspiracy theories that abound. There is no credible bogeyman who can be recruited and caricatured to provide a stabilising focus for our fear and rage. What makes Coronavirus both so fearful and unthinkable, is its intangibility. Because it is invisible, we suspect it everywhere, in everyone. Its very name is equivocal: Coronavirus, Covid-19, SARS-Cov-2. What is its proper name? What does it signify? What is it? Something is missing that prevents conceptualisation. In Lacanian terms, it fails to enter the symbolic order, to enter a language by which we can mitigate and neutralise its psychological threat. Unless we experience it in the body symptomatically or perceive it directly through the body of someone else, it defies all sensory perception. The virus is hard to grasp as a fact of consciousness (Hegel, 1821).

The unthought known
Whether or not we contract the disease, it infiltrates the personal and collective unconscious. There it resides in repression as an unthought known (Bollas, 1987). Unthought, because it does not lend itself to verbalisation. Our reluctance to really face and articulate the thing we fear, or our fear of it, creates a symptomatology of the mind entirely unconnected to the rampant micro-organism at the centre of the polemic. It is what Wilfred Bion described as a nameless dread, (Bion 1962). It is the very lack of a signifier with which we may conceptualise Covid-
19/Coronavirus/ SARS-Cov-2, that it lends itself so readily to our worst fears and projections and to a contagion of fear.

Under this contagion of fear, what is the unconscious phantasy that links our obsession with toilet paper to an infantile regression to the anal stage? And what defensive function does this serve? I suggest the fetish for toilet paper is the unconscious reach for a magic totem (Freud
1913) that will wipe away what we’ve lost and what we stand to lose. At the level of unconscious phantasy, it cleanses us of the poison within. It is a signifier for the unthought known that we are no longer in control of our bodies or of our lives. This totem or fetish, far from being a means of stabilising and dealing with our fear, is merely the unthinking and unproductive expression of the nameless dread.

Naming the dread
The virus invades our unconscious. It reactivates the nameless dread that is latent in all of us. The dread is an old, familiar affliction which the adult has learned to defend against if not resolve. It is the irrational unmetabolised fear of the infant. Its terror that it is about to die. What it imagines that it excretes is its own disintegration. This terror is ancient and latent in all of us and pre-dates our acquisition of words and thoughts. Getting hold of this unconscious fantasy and mitigating it in the individual and in the collective, is a process of self-knowing. In
this, psychoanalysis has a unique role to play.

Thinking the unthinkable
Because the dread is nameless, it is unthinkable and because we can’t think it, we can’t manage it. It becomes projected onto the demonised Other who brought it here from outside, the complacent shop assistant who does not wear a mask and gloves, the politician who can’t be trusted to redeem our lives, the coughing  pharmacist who should have stayed at home …  Projected and lodged in the Other, our unprocessed fear is split and externalised into the imaginary realm. Projected into someone else, we find in them a focus for our rage.

Strong emotions – and fear among them – require a response which is to be specific, namely the result of a work made by the adult in order to hold and to … share the child’s point of view, finding a way to get through. Resorting to group prefab responses… only shows that adults cannot bear to let themselves be infected by the child (Gaburri and Ambrosiano (2003) translated in Perini)

The unheld child described here is the child in each of us. Prefab responses take the form of magical thinking: stigmatisation, scapegoating, xenophobia, moral judgment, and conspiracy; the stock assumption of immunity or resistance on the basis we are “young” or have “no underlying conditions”; the upsurge of protests in some Democratic States in America that the lockdown is a conspiracy against Civil
Liberty.

These defences are a form of madness and fail to resolve the underlying fear, which is that of the frightened child within. The incendiary potential of these defences is exacerbated when populism, with an eye to the main chance, stokes the madness, as is happening in the US right now.

While we are in abeyance on so many external fronts, our internal processes become the battleground for remaining solid and resilient in these most difficult times.

Real-world issues
Meanwhile, our internal insecurity has its external correlation in matters no talking therapy can talk away: under this pandemic, there are unprecedented claims for mortgage relief, tax relief, loans, overdrafts, Universal Credit, Food Banks, and not least real concerns for our own safety and for the safety of those we love. The lives we may have lost. It can be a challenge not to be subsumed by what can feel like a tidal wave of diminishing returns. Moreover, in our personal circumstances, there is no separation between the individual and the collective. The social contract How will our mental functioning in this pandemic disturb and reshape our relationship with the state? In submitting to remain at home for the general good, whatever the cost, most of us are experiencing for the first time an almost complete surrendering of our agency. While few can dispute the categorical imperative in doing so, in the West, this is an unprecedented and dramatic redefining of the social contract. It creates in our homes across the hemisphere a tension that cannot hold out for long. Will the state’s ruthless instinct for its own survival and its latent fear of the rising mob, prevent it from holding firm against the temptation to undermine our democratic rights beyond the emergency? Viktor Orban, trading on the politics of fear, has already dismissed a return to democratic normalcy in a post-pandemic Hungary.

Could not our own nervous and intimidated leadership in the UK, caught up in its own contagion of fear, succumb to the very real temptation to reposition itself as a regime of digital surveillance and authoritarianism? Moreover, in our broiling unprocessed paranoia, are we not susceptible to trading in our freedoms to the state in return for a fantasy of parental protection? In such a magical landcape, we would find ourselves having to remember and forget, like Boxer in Animal Farm, that we had once surrendered our free will and interiority to a regime
aggrandised under the guise of keeping us safe.

Conclusion: what is the place for psychoanalytic psychotherapy?
These are unprecedented times and it is difficult to conceptualise what is happening to us now, let alone where we go from here. In this new diurnal, finding an internal space of containment, where coping happens, is more important than ever. The work helps us to create a much needed internal space where we can explore and integrate within ourselves our own internal and external reality. To develop the internal mechanisms to keep calm and carry on. Most difficult of all, in inner and outer worlds so disorienting, to be able to tolerate, accept and remain
solid in the not knowing.